GARDALAND: WE'RE ALL FANS OF IMAGINATION

Managing a Facebook page with more than a million fans means answering bizarre questions everyday, constantly coming up with new engagement mechanisms and sometimes putting ourselves in a little green dragon’s shoes. This page is Gardaland’s and it means working and having fun at the same time. 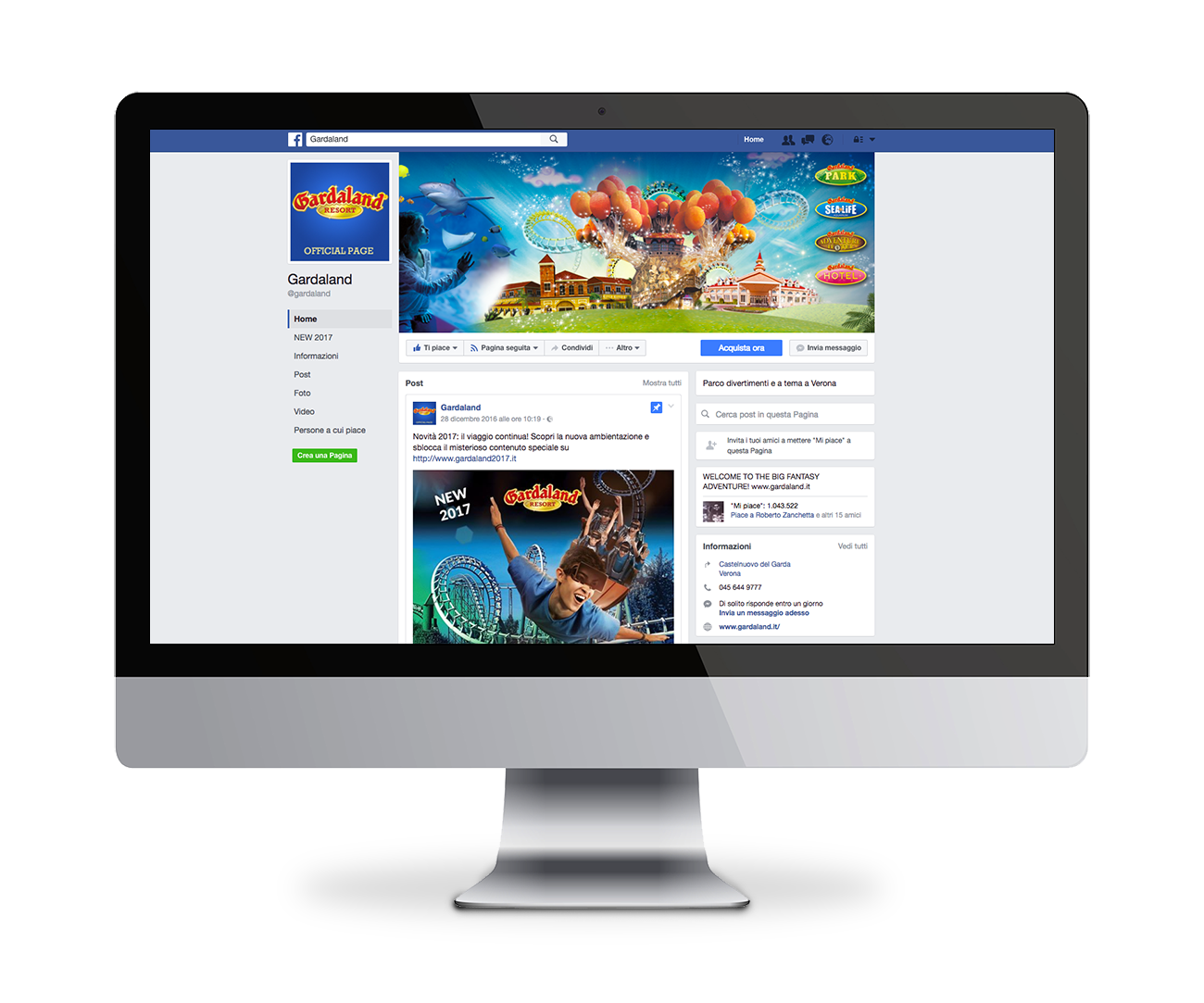 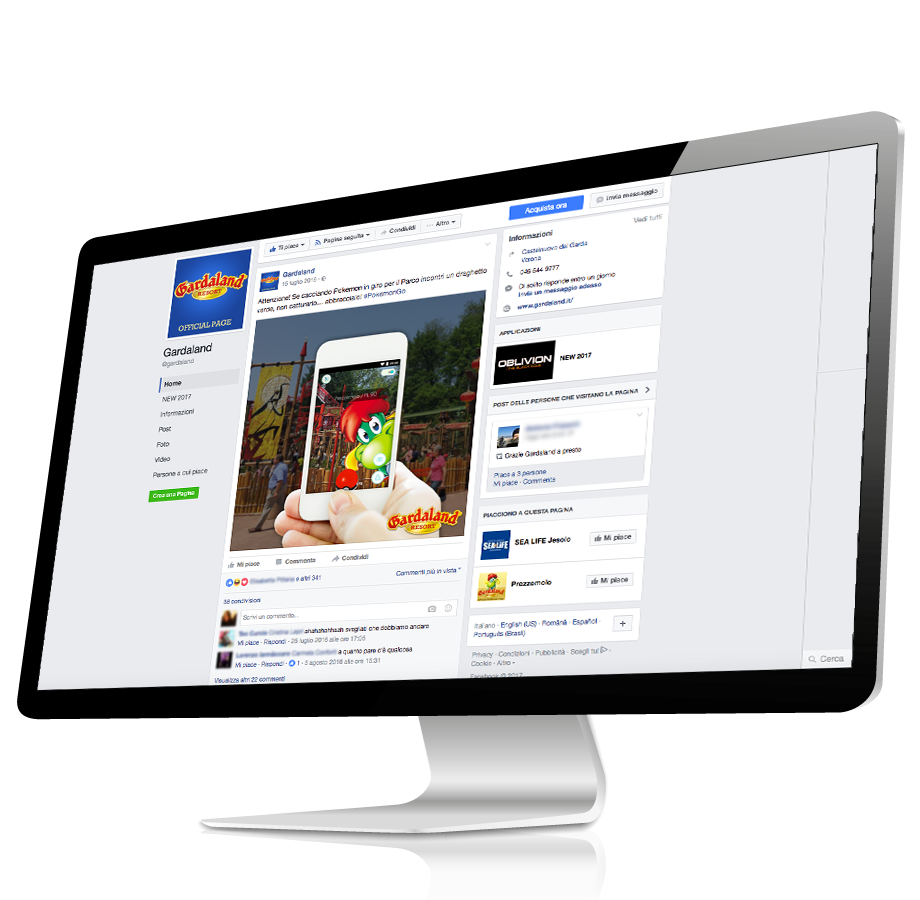 “A great adventure of imagination”: seems to be the title of a children’s novel, and instead it was our brief. Gardaland and Prezzemolo pages had to show all the spirit that distinguishes the most famous amusement park in Italy.
Our Gardaland adventure began in January 2013, with the task of designing a launch strategy for the novelty of the year.

The solutions produced in these years are various: in addition to informative posts, we have created quizzes, contests, postcards to share and numerous special posts promoting the engagement of fans, that have always participated enthusiastically. We managed the large amount of information with a detailed editorial plan and by creating several templates that would make the graphic work more agile and the posts more recognizable. Moderation has been simplified by the introduction of an internal FAQ document. We have dedicated special interactive detailed tabs for special events.

Every year, for the launch of events and attractions, we designed special operations with different engagement mechanisms. Some examples? Prezzemolo’s quizzes, the inventor of Prezzemololand, the teaser quiz for the Madagascar live show!; the “choco-crossword”puzzle for Eurochocolate; the team battle for themed rooms in the new Gardaland Adventure Hotel. And the fake journalist Candy Tricks’ live from the park in the first day of Gardaland Magic Halloween. She conducted interviews and did some investigative reporting, and then she ended up "captured" in the middle of a wild zombie dance.

What happens when a black hole powerful force of attraction approaches Facebook? It could suck in all the posts! That’s how we imagined the Facebook launch of Oblivion -The Black Hole, the 2015 attraction where, after a vertical dive, you slip into an underground “black hole”. We challenged the fans to "save" the posts on the page, deformed in the graphics by the irresistible gravitational attraction, with hits of likes, comments and shares. Each "saved" post was republished on a special tab, composing a sort of social puzzle to be completed with the help of fans.  A simple operation but of great impact, unique in its kind in social networking. The 12 posts have gotten almost 10 thousand likes and over a thousand shares.

KUNG FU PANDA ACADEMY:
WHO'S GOING TO BE THE HOSTILE DRAGOON?

What does a true Kung Fu warrior have to do besides eating noodles? Launch his/her own battle cry, of course. To promote the new area of attractions dedicated to Po, the most famous panda in animated cinema, we challenged fans to send us their films, collected in the special tab "The Cry of the Warrior", sharing the most beautiful performances on the fan page. As with the launch of the “Madagascar Live!” show, our graphics team had to deal with Dreamworks, the owner of the image rights, creating materials that met their strict guidelines and passed their scrutiny. 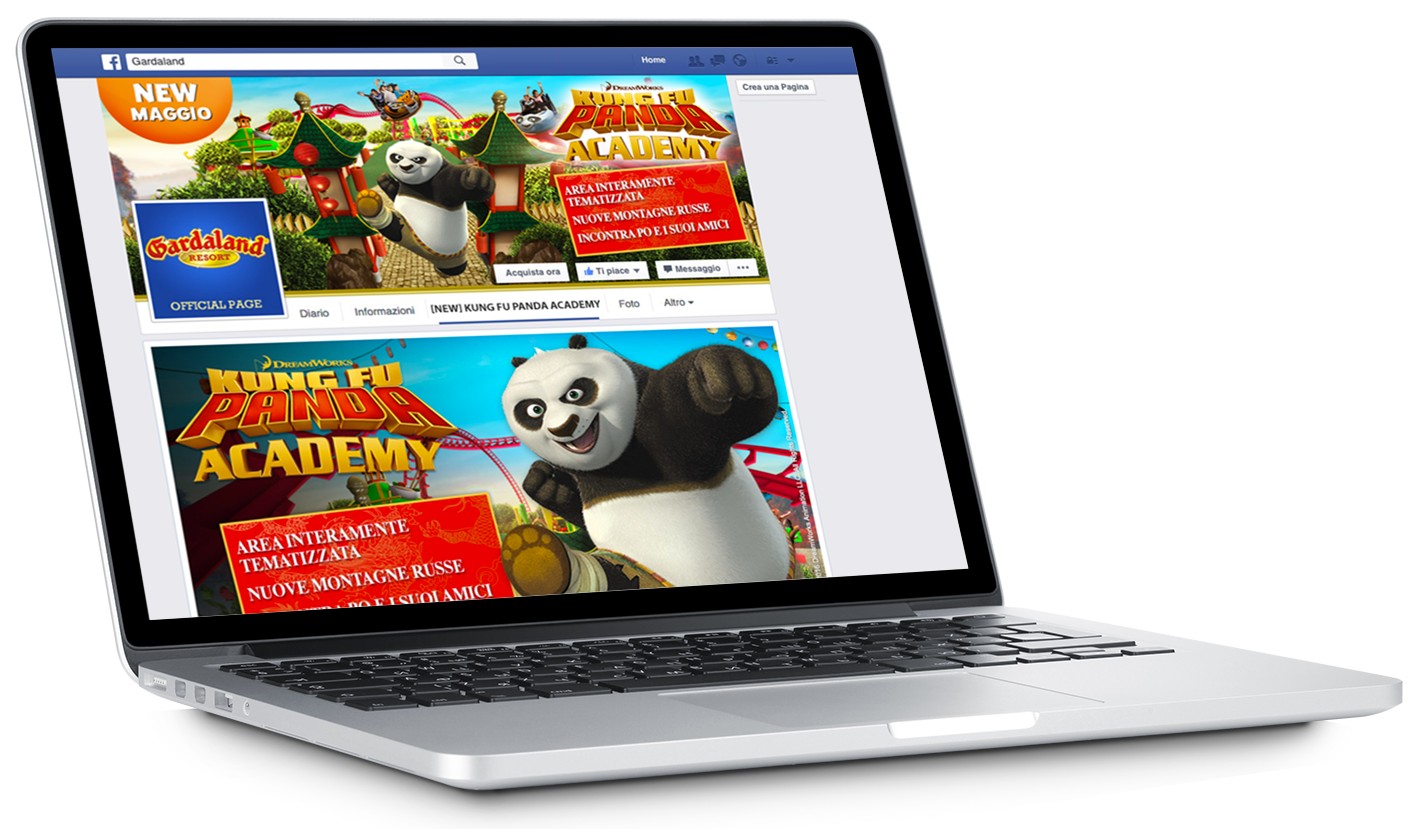