Flying to Brasil thanks to a coffee? With Bialetti Store’s contest you can. 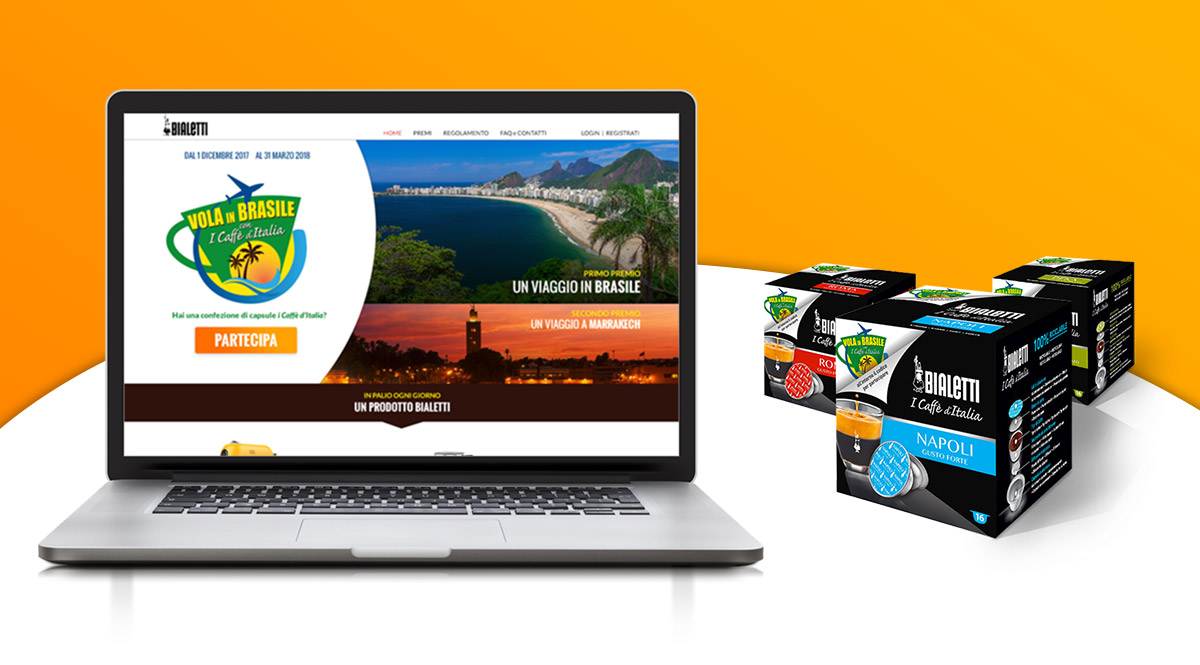 Raise your hand to those who have never taken part in a prize contest promoted on the packaging of a daily use article.

Using packaging to promote marketing initiatives such as competitions is a proven technique for promoting products and attracting new customers, but not only! The competition can also be a way to collect sell out data. For example, it is useful to test the effectiveness of your sales network, in order to possibly change your marketing strategy related to distribution.

From this necessity, "Fly to Brazil with I Caffè d'Italia" was born, the prize contest that Olojin has designed, built and managed on behalf of Bialetti Store.

The mechanics are very simple: inside the boxes of a selection of coffee blends, participants could find a unique alphanumeric code. By registering on the competition website www.concorsobialetti.it, they were able to play the codes found in the packages and find out immediately if they had won the daily prize, which consisted on a Bialetti product.
Among all the codes, played by the participants during the period of validity of the contest, were finally drawn the winners of the two final prizes: a trip to Brazil and a trip to Marrakech.
At the time of registration, users had to declare in which channel of the sales network they had purchased the coffee capsules, by selecting from the large-scale retail trade, small retailers, online stores or Bialetti Stores.
From 1 December 2017 to 31 March 2018 there were over 20.000 participating users, who played about 120.000 codes. As many as 34% of the participants played at least 5 codes, confirming the fact that the competition stimulated the repurchase.

Was the target achieved?
Widely! Not only "I Caffè d'Italia's capsules" were literally like snapped, but thanks to the information provided by the participants, Bialetti Store was able to learn about the most successful distribution channels for coffee capsules, also within its direct sales network.

Would you ever have thought of running a contest with this target?
If you would also like to launch a contest to achieve an objective of your marketing strategy, such as launching a new product, increasing the loyalty of your customers or collecting useful data for your business, then you just have to call us!